Should you care about LEDs usage?

Have you ever wondered if you should start using LED lights? And you’ve never found the time to find out if they’re really worth it. Let me show a couple of examples of the consequences of using LED bulbs or lights in your projects, home or even vehicles.

What a LED light really is

A light-emitting diode or LED, is a light source consisting of a semiconductor material with two terminals. It is a P-N junction diode, which emits light when activated. If a suitable voltage is applied to the terminals, electrons recombine with holes in the P-N junction region of the device, releasing energy in the form of photons. This effect is called electroluminescence, and the color of the light generated (which depends on the energy of the photons emitted) is determined by the bandgap of the semiconductor. LEDs are usually small (less than 1 mm²) and some optical components are associated with them to configure a radiation pattern.

So, we know from this technical description that a LED is just:

and common use diodes for DIY projects have following schematics

However, SMD leds have next schematics

SMD LEDs are currently the most used type of LED on the market. The large-scale production of manufacturers has reduced its price significantly and the development and continuous innovation in the luminescent part of the semiconductor crystals ensures that, year after year, LEDs offer more luminosity with the same power consumption.

SMD LEDs are currently the most used type of LED on the market. The large-scale production of large manufacturers has reduced their price significantly. The development and innovation in the luminescent part of the semiconductor crystals offer brighter SMD LEDs year after year, with a lower power consumption. Due to this, SMD LEDs are widely used in domestic and industrial lighting systems, in vehicles, as well as personal electronic devices such as LED screens, televisions, projectors, and so on. SMD LEDs with the RGB system are used for decorative lighting and big full color image screens.

Depending on their size, LED types are classified with a 4-digit number: the first 2 digits for the length and the next 2 for the LED height in tenths of a millimeter. For example, a 5050 led is 5x5mm. The following table shows the most commonly used SMD LED types.

Prepared for a current of 2mA with about 2V (consumption of about 4 mW).

For $20mA$ current and with 2 or 4-5 V, designed for viewing in direct sunlight. The 5 V and 12 V LEDs are normal miniature LEDs incorporating a series resistor for direct connection to a 5 or 12 V power supply.

Let’s assume we have no idea which type of bulb is better, but we have the knowledge and tools to measure and take smart decisions. In following example, I show you how you can measure discover the operating current of a LED bulb and compare against others. Finally I will also make an estimation of a yearly cost of each of the options: LED light and halogen lamp.

For this example, I choose following two bulbs from Philips.

You can find them at Amazon

Some reference images of the products

There is no mathematical way to calculate the current consumtion, rather than measuring. To take measurements of the current drawn by each of the components we can easily connect an amperemeter or connect the device to be measured to a power supply that already contains one. For example, Im using following power supply

In order to figure out how good the halogen bulb is, from comsumption point of view, we need to measure:

Measuring the current of each the halogen bulb

Measuring the current of each the led light

Comparing each of the results

Finally, we can compare both results, as shown below

It is clearly proven that LED usage is better for both our projects, bulb lifetime and our budget, they tend to have better performance and help ous to save money. So, now you know it, use LED light at home, in your car, bike, cat…everywhere! 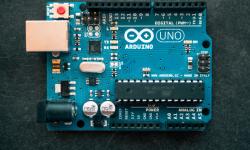 How to blink the damn ESP32 built-in led